Well, there usually is. I have been walking the Verdun waterfront almost every day since October 1st and while I have noticed the odd tree that has been chewed, it is only the last week or ten days where it has been disturbingly noticeable. I say “disturbingly” because it really is a thin strip of forest and it does not take a whole lot of intervening to cause some major (damage) changes. Also, I know nothing about beavers and their habits.

This picture gives you an idea of what I am talking about. 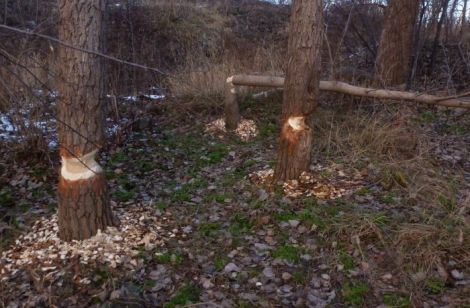 I was not sure what to do, yes, this situation made me feel that I needed to take some kind of action, but, luckily, I ran into a friend who has worked in wildlife services for over 10 years and he explained to me that the beaver situation in Verdun is well documented and that, basically, short of just filling the whole area in with concrete, there really is not much that can be done. Now is the time when beavers build their winter huts. Apparently, they rarely actually build dams because any sizable body of water could have undercurrents that could threaten their whole operation. Don’t say you never learned anything here. 🙂

This is nature. It is what it is. It is true that the Verdun waterfront is largely a land-filled “nature” but it is what we got – and the illusion is brilliant!

I saw about 11 geese on the water today. The majority of the geese along Verdun left town about a month ago, but, according to my friend, since 2009 some geese have been observed here as late as mid December even though they are usually all gone by mid November. Also, any ducks you see now are probably being fed by humans, he explained.

So I walk along this incredible waterfront all the time trying to observe, paraphrasing Wittgenstein, what I would not have seen had I not been observing (or was that Yogi Berra? {lol}) . It’s pretty clear to me that a lot of signs of climate change are happening all around us. And we do, from the east end of the trail, standing amidst all these beaver chewed trees, get to see the new Champlain bridge being built as we mindlessly just keep keeping on into the sunset of everything we have ever known…

By the way, I have started a project called L’automne based on my walking this autumn on the Verdun waterfront. So far I only have a Facebook page but do please drop by and check it out. I will post something here soon.