“For me, walking has become less physical transit than mental transportation. It is engaging. I have become, I fear, a difficult walking companion, liable to slow down and point at things. I can turn this off, but I love to have it on: a sense of wonder that I, and we all, have a predisposition to but have forgotten to enjoy.”
― Alexandra Horowitz

Started out at Mont Royal Metro. 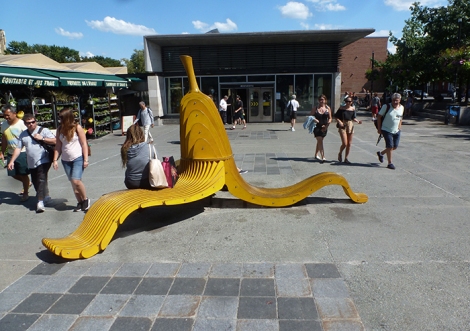 And, on the wall behind the Metro station, one of my favorite things in Montreal – Tango in Montreal by Gerald Godin. And I found this pretty good translation here.

7:30 in the morning the Montreal metro
is full of immigrants
this world wakes up so early.

the old heart of the city
therefore still beats
thanks to them.

and all the reasons in the world that it would
stop itself
quit.

And across the street on the north side of Mont Royal is the Maison de la culture du Plateau Mont Royal.

I checked out the exhibition inside. 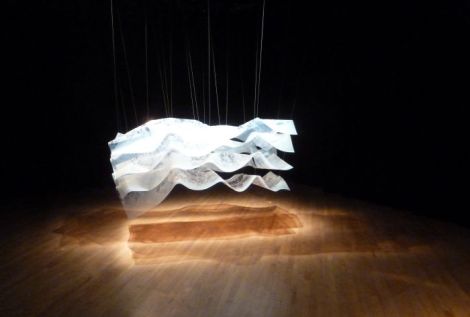 I turned north on Berri.

Nice little square at the north end of the park.

Southeast corner at Pontiac and Bienville.

North on Pontiac this place does not appear to have an entrance.

I have to admit that as one gets older there may not be too much harm in occasionally looking back.

If there is one thing I have learned from growing up in Verdun, it is that good urban density need not be built by high-rises, that is the myth, this city has been remarkably well served by it’s traditional duplexes and triplexes. 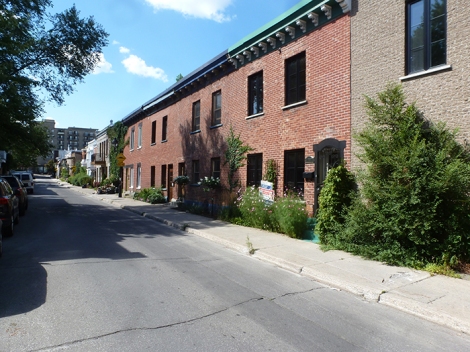 One for the architects who may read this post.

Heading east on Gilford. I guess I could add barber shops to my list of “things” that intrigue me, seems, somehow, so anachronistic,  and I sometimes shake my head that these places still exist…

I think all corners should be a business, something local, everyone should have at least one business offering something they need on some kind of a regular basis that close to their home, it’s part of the magic of good urban living. 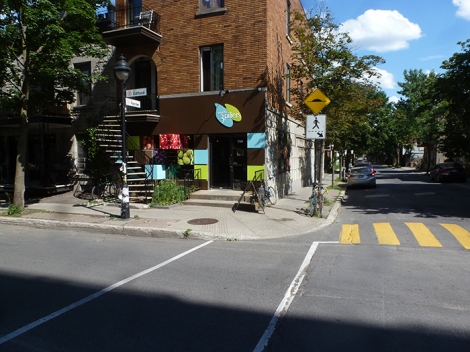 Yep, my thing with ivy. It has to do with the shared incoherent aspects of both nature and humanity, how we both manage to be randomly beautiful yet so mindlessly destructive, and we both have thrived, so far,  despite these obvious contradictions.

The flats look huge along here, 8 to 10 1/2’s not unusual along this stretch.

Took Boyer north, and ended up back in good old Parc Sir Wilfred Laurier, one of my favorites in Montreal. Never saw this little monument to Isabella the Catholic before.

It’s a fabulous people park and I am for the most part not a people photographer, being more of that school of photography that Walter Benjamin so wonderfully attributed to Atget, that Atget’s photographs of Paris were like the scene of a crime (devoid of people, slow shutter speeds being a consideration at the time). I think mine (my “artistic” images, not necessarily what you see on these walks) are not so much reminiscent of criminal acts as such but of possible conspiratorial and probable (hopefully) human interactions that commonly occur in the city on a given street or location. I like to think that I imply things with my photographs, lol. Here is a bonus link to a very well known and powerful Benjamin essay on art. 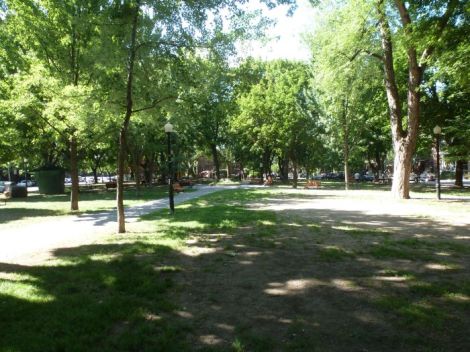 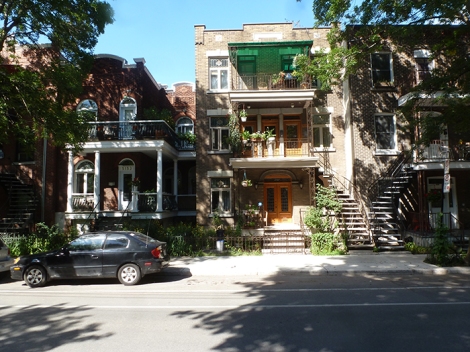 At the north end of the park there are these locked containers that seem to be part of a composting/recycling project (they have padlocks, one assumes community members have keys).

Bordeaux and Masson and what else, a closed street, but at least she seems to be enjoying her job.

Then a look south.

Ahead is a long underpass under the train tracks. These can often be dull and my instincts tell me to explore the tracks area and see what happens.

The street just comes up to here and circles back down the other side. 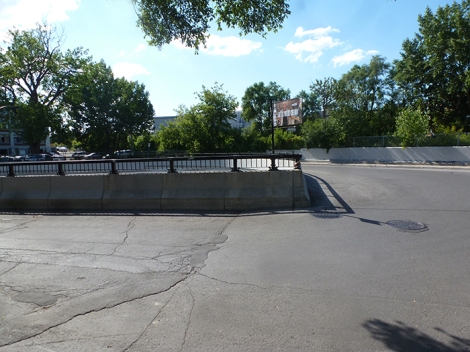 vgrek – not sure what to make of that but looks more like an intervention than an official sign.

And here is your to be expected (hoped for, because I don’t climb like I used to) hole in the fence (locals usually use these as shortcuts). 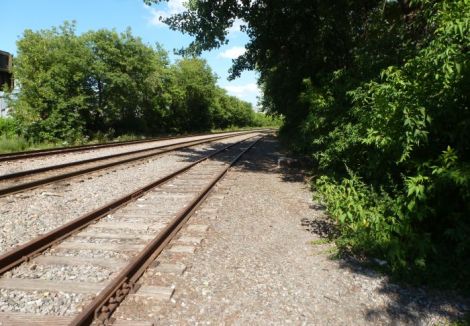 The view down the other side.

Looking for the corresponding hole in the fence.

Had to actually do a little climb. But on the other side I saw a path heading west that appeared busy with cyclists, so a decision on the spot is made to simply follow this path. Excuse the blurry shot.

Woman up ahead making some adjustment’s to her child’s situation in the carriage. 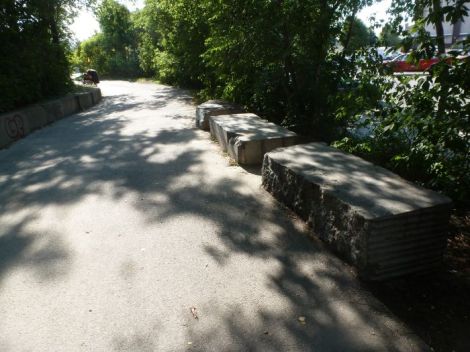 On my right is some kind of a power plant.

Looking back at the power plant.

I have to admit that I had lost my bearings along this path and had no idea what streets it was crossing over. But writing this now, with Google Maps on board, I can tell you that this was de Lorimier. And if you scroll back to “looking north on de Lorimier” you will see the structure I crossed over on.

Lots of variety along here.

And a very thin little strip of a park.

Holes in the fence every place there is a chance to cross just about. 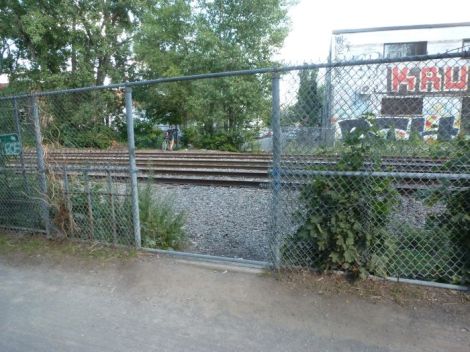 Looking back. There is even a water fountain.

Regular and astute readers will recall this stretch of Papineau from Walk # 3.

Sort of a No Access/Access point.

Either side of the tracks is an ongoing art gallery.

Put my hand up high to snap one of the inside of this building  – didn’t work too well.

It can get busy.

Looking back over a fence along a city yard. 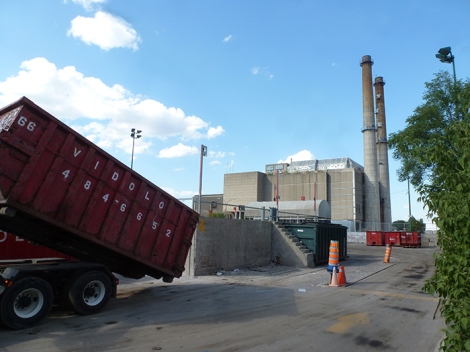 This is different, crossing over Christophe Columb. 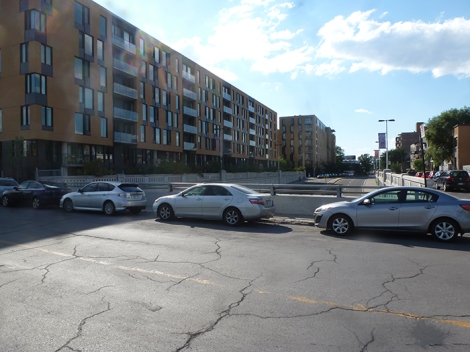 Writing on the wall.

I wonder who gets consulted when the city says, gee, we could use some sculpture along here.

It’s getting hotter, my sandaled feet are feeling dusty from this gravel trail and I am appreciating a building like this that has a lot of shade giving trees around it. 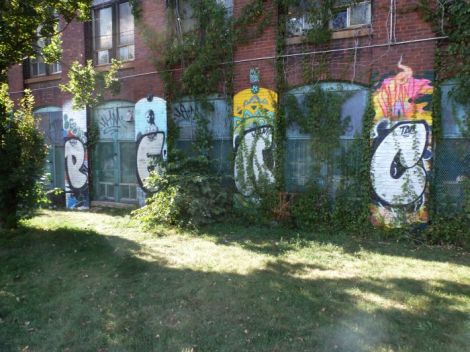 Overpass may mean change, which is good. 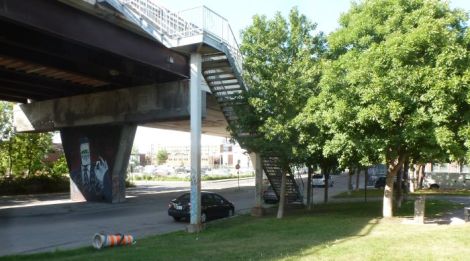 Another one of these on the fence things but I cant really make this one out.

Traffic cones, even under here where nothing appears to be happening, there are traffic cones.

Still an apparent long straight stretch ahead. And I am pretty sure that is not the Metropolitan above me.

But it is a heavy duty overpass just the same. 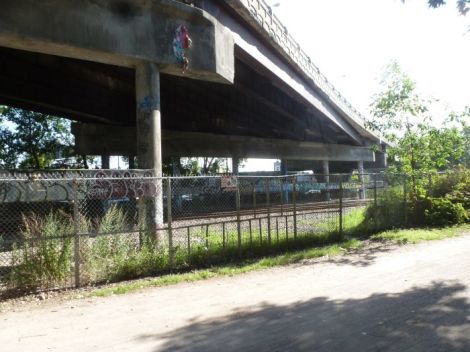 Took a little break at this shady oasis.

I know this building so figuring I am near boulevard Saint Laurent, just not sure exactly where that would be lol.

Side of that large building. 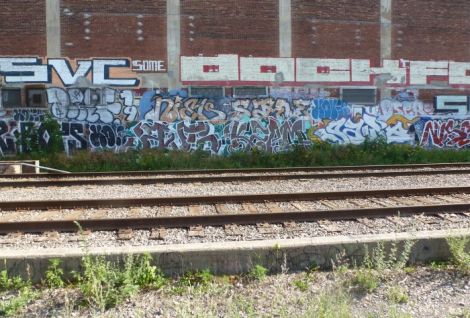 Beginning to feel like if I don’t take an option this path is going to take me to Winnipeg. 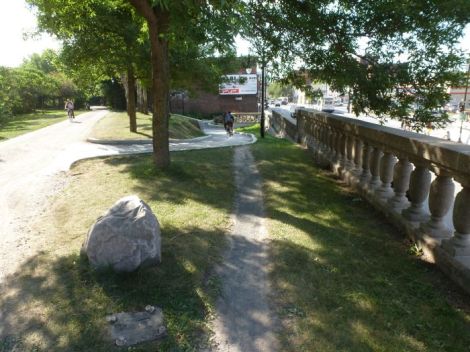 Bunch of not cheap cars in the lane, ok, all good, move on.

And around this point I decided to get off the path and take Clark street south. I had been walking a few hours, often for lengthy stretches in the sun, and was feeling in need of a break, and civilization (a main drag with a coffee shop) was sounding good. And I laughed to myself at the irony that I ended up taking an underpass to get off that path that I discovered by avoiding an underpass.

On a wall of the underpass.

Detail on the way.

And you can see the steeple of the Church of St. Michael and St. Anthony.

And that building again, from the other side. 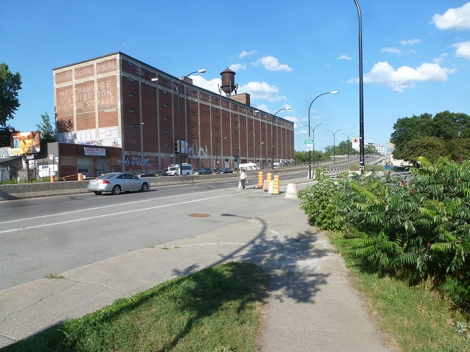 Looking back at a sculpture park I missed (ok, my font seems to have changed and not sure how to fix it it).

Going south on Clark. Love these staircases but the one on the upper right does not appear to go to a door.

And up ahead is that steeple again.

Another take on the triplex.

And this building is quite different too. 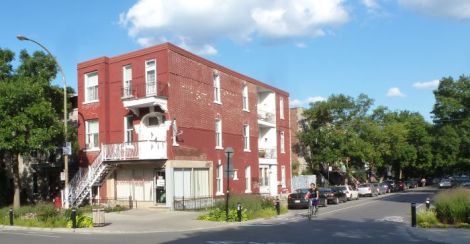 Mont Royal seems slightly flat here (wide angle lens) but there are some great views from this park.

Football. I played organized football from about the ages 10-12, won two championships in my league and one Peanut Bowl as overall Verdun champions (if you want a  funny story message me about Peanut Bowl 2). It was the best of times. It was the worst of times. I got to wear that Champions jacket for a few years, and I realize now it gave me some trouble. Such is life in the big city (or a small town I suppose).

Across the street, home of the Canadian Grenadier Guards.

South end of the park, Bixi and the wall of Hotel Dieu hospital, oldest in North America.

Lane off of Duluth.

I wonder what traffic cones looked like in the 60’s? 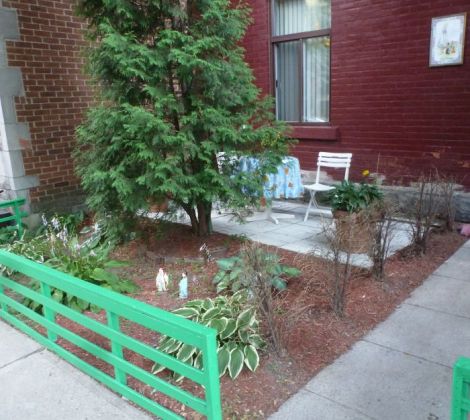 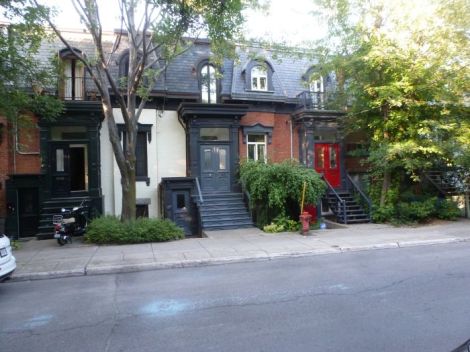 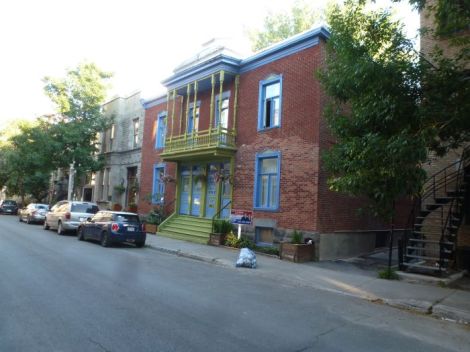 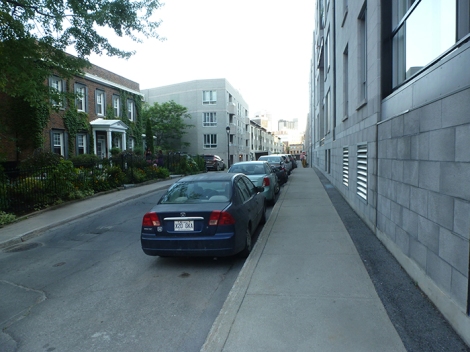 The stretch of Hotel de Ville that is part ramp, part staircase.

Heading into the projects on the east side of downtown.

Hope you can read this. 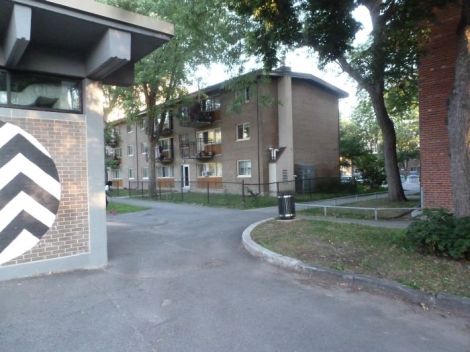 There is some green space.

Plenty of parking and community composting. 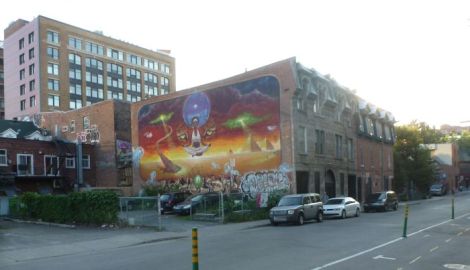 And the journey comes to an end at the Saint Laurent Metro.

This has been another one of those epic walks that feels like I traveled through a few dimensions, almost hard to believe there was that much variety in the space of 4 – 5 hours. But Montreal is a really wonderful walking city and that makes these walks interesting and very pleasurable. Until next time! Take care.