Some nice ideas brought up, but basically they can do what they want with it. 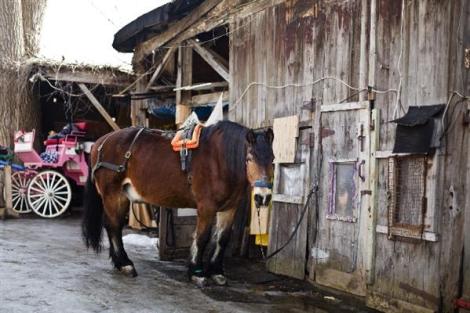 MONTREAL – The Griffintown Horse Palace, listed among Montreal’s 10 most endangered historic sites, was sold to a developer last week, raising new questions over how to reconcile preservation and profitability during the tail end of the city’s real estate boom.

The 150-year-old stables were identified by Heritage Montreal as one of 16 sites at risk for neglect, or demolition, at a time when prime city land still continues to fetch near-record prices despite an anticipated slowdown in the housing market this year. On Tuesday, opposition party Projet Montréal called on city officials to intervene on behalf of another at-risk historic site – the decaying Sir Louis Hippolyte LaFontaine Mansion – located on one of downtown Montreal’s largest remaining site available for development.

Owners of some of these sites, including the Horse Palace, the Lafontaine Mansion and the recently closed Mount Stephen Club, insist they will be preserved, but have yet to decide on their future vocations.

“We are trying to find a long-term solution (for the stables). We want to renovate them,” said Normand Beauchamp, business development director for Montreal developer Maître Carré, which bought the Horse Palace and an adjacent triplex next to its 143-unit Carré de la Montagne condo project on Ottawa St.

“They will not be demolished and turned into condos.”

Developer Jack Arduini, minority partner in the company that owns the decaying LaFontaine Mansion, said he’d like to see the former residence of the second premier of Eastern Canada turned into a museum.

“We’re leaning toward a museum, but if it’s not that it will be something else,” Arduini said. “It will definitely be preserved. But it has to generate some profit too.”

The mansion is located on Overdale St. near Lucien L’Allier St. on an expanse of land acquired by Arduini and his partner Kheng Ly – backed by Asian investors – for $28 million last year. Arduini said he’s asked the city to approve a 40-storey condo tower for the site in a two-phase project that would include other uses.

What’s key for the site is that any tower be developed harmoniously with the existing mansion, said Dinu Bumbaru, policy director of Heritage Montreal.

“The question is not highrise or not but rather how will they form an ensemble,” Bumbaru said in an email from Johannesburg, South Africa, where he is attending a conference. Bumbaru also raised “the broader concern for the blocking of views of the mountain.”

“The contacts we’ve had with the developer and their architects have shown that they see the same challenge and are working on solutions for these as well as the more functionalist issues like shadows or wind turbulence at street level,” he added.

He called on the federal and provincial governments to “act as worthy successors of LaFontaine by classifying and designating the mansion to give it a national status in Quebec City and Ottawa.”

But converting and renovating a historic site for a public vocation is costly, with developers and government officials reluctant to foot the bill.

Maître Carré, while open to keeping the Horse Palace as a stable, acquired the site because of its potential impact on the values of its neighbouring condo development, said Juliette Patterson, president of the Horse Palace Foundation.

“Mr. Beauchamp is not a philanthropist,” Patterson said. “We’re in talks with him to have it remain a stable. There’s a lot of openness on his part. However he has certain concerns over how it’s going to impact the new condo development there.”

She called on the heritage community to help raise money needed to renovate the stables and eventually acquire the land from the developer.

“It’s going to take the heritage community to put their money where their mouth is.”