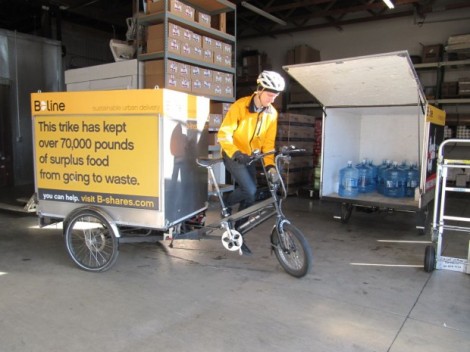 Portland’s B-Line delivery service is pedaling past bicycle couriers into a world where bikes can actually replace urban truck and van deliveries.

The company launched in 2009 with two electric-assisted “freight bikes” that can each deliver 700 pounds of goods in a 45-square-foot trailer. The fleet has since tripled in size to six trikes making an average of 10 routes a day.

Seven hundred pounds might not be a lot for a semi or a box truck, but in the world of bicycle delivery, it’s huge. Most cargo bikes max out at 100- or 200-pound deliveries.

“To my knowledge, nobody in the world is doing the volume of delivery by bikes that we’re doing,” said company co-founder Franklin Jones.

The trikes offer unique advantages over traditional truck deliveries – not only in reducing environmental impacts but also in skirting bridge traffic and finding parking (the sidewalk in front of a downtown building is fair game for trikes).

“When you have rush hour traffic backed up on the Burnside Bridge, we’re riding right by,” Jones said.

Eight B-Line cyclists make an average of 10 trips a day from a warehouse in Southeast Portland. They each stop seven to 10 times to deliver products such as bread, produce and office supplies from 10 different companiesto more than 100 Portland locations.

Advertisements on the sides of the cargo trailers function as moving billboards and bring in some extra bucks for the company, which explicitly aims to replace downtown delivery trucks and vans with bikes.

“From the environmental side, it decreases congestion and greenhouse gas emissions, and it helps the city of Portland meet the targets in its Climate Action Plan,” said Jones. “It’s an environmentally sustainable business, but it’s also a financially sustainable because we deliver in a way that’s price competitive.”

Price comparison is complicated, Jones said. But a group of masters students at Portland State University did a study that showed the price of a B-Line trike delivery was on par with a truck or van delivery if it included three stops or more and 600 pounds or less when you account for the cost of labor, vehicle maintenance, and fuel, among other costs.

Other businesses in Portland and elsewhere are doing routed bike deliveries similar to B-Line, saidBikePortland blogger Jonathan Maus. But he said B-Line is special because their freight trikes are able to carry so much volume.

“They’re a freight company that can deliver 500 pounds in one trip. Nobody else comes close to that,” he said. “They really have the potential to replace trucks.”

Jones said it’s more than potential at this point. For example, he said, one of his clients hired B-Line to deliver products from two different companies in one trike.

“Prior to us doing that, they were receiving those deliveries from two different delivery services,” he said. “I stopped counting at a certain point, but we’ve replaced thousands of truck or van deliveries.”

When they’re not delivering products to customers, the freight trikes are used to pick up unsellable food from grocers and deliver it to places that serve the homeless and hungry. So far, Jones said, the trikes have rescued 70,000 pounds of food from going to waste.

Transportation can be the problem that keeps food that’s past its sale date from being used before it spoils, Jones said. And B-Line offers a solution.

“Trucks can’t pick up produce, take it to a warehouse and deliver it to another location before it goes bad,” he said. “We can pick it up and delivery it quickly.”