As aging infrastructures reach the end their useful life, major cities worldwide are tearing down high maintenance and congested transportation infrastructures. Designed according to the brutal functionalist perspective characteristic of the latter half of the 20th century, Montreal’s Turcot Complex is no exception. Located south-west of downtown, the deterioration of the monumental concrete structures requires urgent ‘metrofitting’.

Given significant debate as expressed by civil society with regards of the roles and functions of urban infrastructures, the GRUHM citizen proposal consists of a compact cruciform interchange combined with the conversion of the inner city highway into a shared transit corridor. The result is an integrated multimodal system that drastically reduces energy consumption, paving the way to improved urban mobility and quality of life throughout the works. 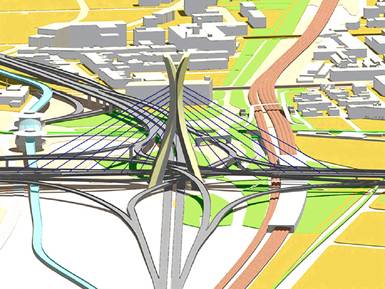 While fitting the restructured systems within their existing right of way as well as recuperating salvageable structures, the concept avoids costly and disturbing expropriations within the delicate urban fabric. Furthermore, by allowing dialogues with all scales of interventions, the proposed approach promotes a multitude of opportunities thus facilitating its urban articulations.

With embedded multi-functionality and permeable frontiers, the concept strives for living neighbourhoods as it rethreads isolated urbanised districts with their surrounding commercial and ‘naturalised’ ecosystems. The restructured systems act as an inter-active mobility system dedicated to moving people and goods, rather than promoting fluidity of vehicles hence a reduction of road related accidents. Finally, the focal point of the cruciform permits the realisation of a monumental tower from which the various ramps are suspended from, not only redefines the Montreal skyline with a landmark silhouette, but also requalifies the gateway corridor linking the city to its international airport.

Ultimately, the GRUHM’s suspended cruciform interchange and its converted highway is a powerful and coherent solution, giving it’s original meaning to ouvrage d’art. The concept provides easy to achieve opportunities rather than simply reducing impacts, contributing to the emergence of a much needed social engineering practice. Without any doubt, the project skilfully addresses the stakes of delivering a sustainable scenario for the living neighbourhood vital for a 21st century Cosmopolis.

Wouldn’t it be just awesome to see the looks on the faces at the Ministry of Transport of Quebec if this project was to win? Winners will be announced in October.

In any case I am really happy for local architect, Pierre Brisset, who has put his heart and soul into offering the city a better Turcot. As I have said here before, Pierre was working on this  city’s infrastructure long before  Turcot landed on the scene and for such a strong commitment to long term sustainable transportation concepts he deserves nothing less than the keys to the city!